The Pikala project in Marrakech has taken off with a warm welcome from the community. Around 20 youths are currently finishing their training as mechanics and tour guides. 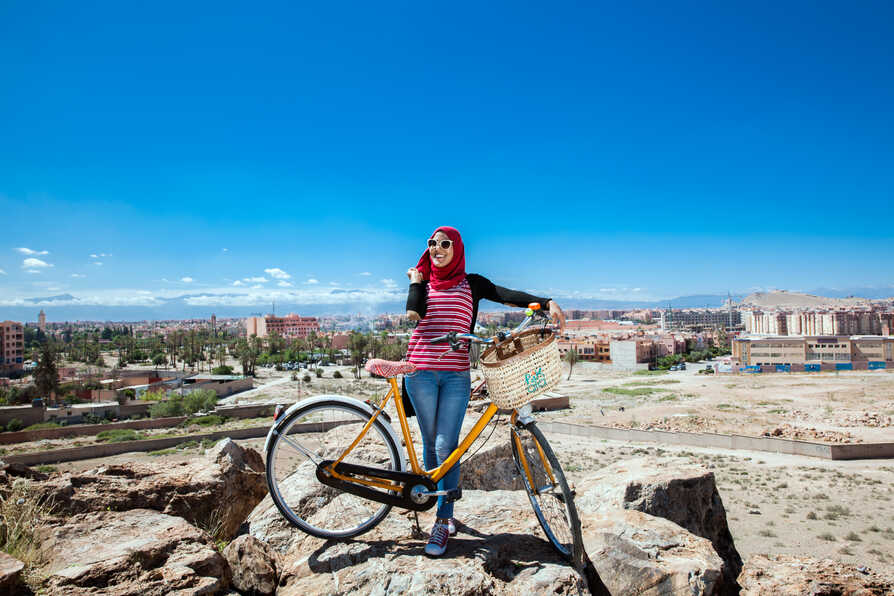 It has been less than a year since TUI Care Foundation started to support the Pikala Bikes project in Marrakech. The project has gone a long way since then. By the time of its big opening in September 2017, it had already gained the trust of the local community and city authorities. Having started its activities in Daoudiate, a neighbourhood of Marrakesh in the outskirts of the city, where the Pikala Garden was built out of a field of concrete; its founder Cantal and her team have now moved to their definite location in Ryad Laârouss just minutes away from the Medina. All of this with the support of the Municipality of Marrakech, that facilitated the location.

Settled now downtown, and having already around 20 youths enrolled in trainings to become local tour guides and mechanics, the Pikala team is offering their bike tours online for everyone willing to experience Marrakech in a different way. All of the tours are developed by locals, and with their bicycle they promise to take you “beyond the tourist districts to show you the hidden jewels of Marrakech that usually remain secret to visitors” –as stated in their website.

The project has already gathered public attention and two different groups of international journalists from various countries -including Morocco but also The Netherlands, Spain, Germany, France and the UK- have already visited our project in Marrakech in less than seven months, to experience it on their own. It is not surprising for this project to get so much attention. Exactly the same happened with the local community the first time Cantal Bakker and her team approached their neighbors in Marrakech. It didn’t take long until parents would bring their children for the Pikala crew to teach them how to ride a bicycle. Moreover, after some time the children’s mothers would also join the classes and special lessons for them would be opened during the weekends. The Pikala Garden became a place to bring the community together and learn from each other.

Since then, the project has consistently gained support from various actors in the city of Marrakech. Hotels offer Pikala tours to their visitors or rent the bikes from them. In September 2017, at the big opening, Ahmed El Motassadeq, Vice-mayor of the city of Marrakech, highlighted: “Our city has had, traditionally, a cycling culture. This culture has gradually been lost as cars were introduced. (…) We believe that with Pikala our people will recover the interest for this mean of transport and, for this reason, we will encourage our youth to use the bicycle and include cycling in the traffic safety education programmes at schools and universities.” Pikala is taking the lead in this regard and has, until now, provided basic training – e.g. e-learning, road safety workshops and up to 1 full day training – to 290 kids and 93 university students. More than half of them were women. Every weekend the students who signed up for the Pikala Club could join activities that varied from bicycle tours or discussions, to communication workshops or mechanics. The aim, they claim, is to slowly establish a community and turn cycling into a lifestyle.

Elise Allart, Executive Director Programmes and Operations of TUI Care Foundation, explains: “Pikala is an innovative initiative that transforms a classic object – the bike - into a supportive instrument on youth empowerment. It not only creates a business case to offer young people a perspective, the project also promotes gender equality.”

The focus on women empowerment remains a key goal for the Pikala project. Girls take part in both trainings on mechanics and bicycle guiding and account for over half of the participants. Amina Boutbi, tour guide at Pikala, explains what she likes about the experience: “I get to know new people. I am that kind of girl that is always at home so this is a new experience. It is a way for me to go out of my shell.” Training sessions are personal and focused on storytelling, presentation, language skills (English) and tourism.

Pikala was born as a way to promote a sustainable mean of transportation and to give opportunities to young girls and boys, but is doing much more than that. It has quickly raised the support of the local community and is involving all different actors to work towards the promotion of sustainable tourism more broadly -as it favours labour and gender inclusion, while reducing congestion and pollution. 90 youths will be trained by the end of next year and hundreds more will be reached with the basic training lessons. By booking their tours with Pikala, visitors can now support this initiative while enjoying a unique experience in Marrakech.